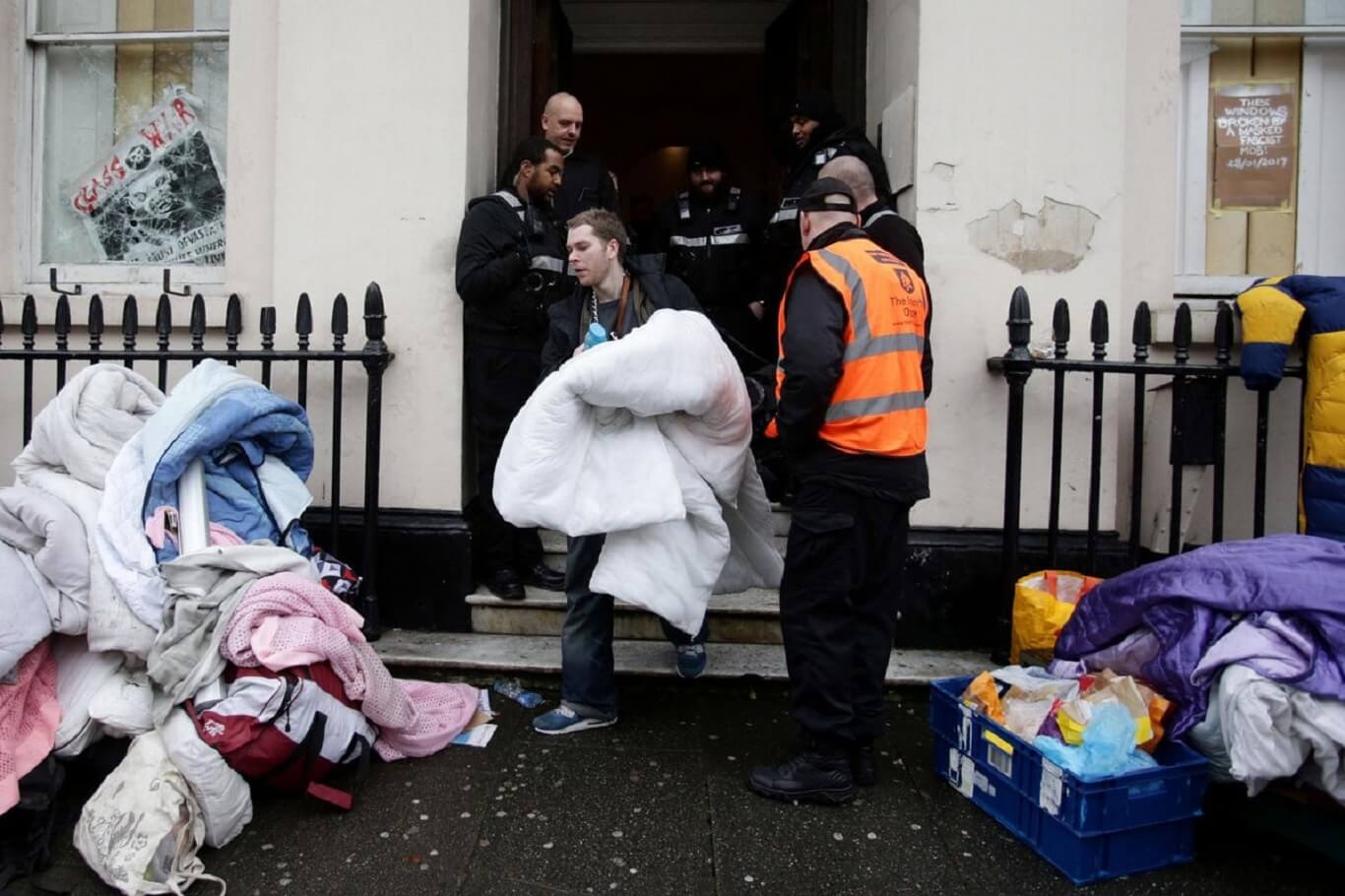 It becomes annoying when the guests don’t leave after a social gathering. When such guests overstay their welcome, even if they don’t do anything, they become a source of annoyance.

If you have been through this, you can imagine how disturbing it would be if someone enters your property – uninvited – and decides to stay. This phenomenon is called ‘squatting’.

Can you sue them? Can you throw out squatters from your house? What are squatters rights? Let’s discuss them in detail.

When some unauthorized individuals live on a property, they may be there as a result of trespassing or squatting. The major thing that differentiates the two is, trespassers, who apply force to enter into a building or property like a window or a door. While squatters enter from an unlocked door or window and gain access for the rest of their lives until they are removed.

Squatters enter unsupervised property without permission. It is most susceptible to squatting properties that are unable to sell through auctions and are abandoned to further notice.

If someone purchases the property, the squatters can be then evicted or thrown out. It is not a crime like trespassing but can be taken as a civil matter. Trespassers can be arrested by law enforcement authorities if they found that trespassing was committed.

As for squatting, it can happen both accidentally and deliberately. Following are some scenarios where a person would be called a squatter;

Difference between trespassing and squatting

As mentioned they are not specifically the same however, they need to occupy a space in both scenarios. Trespassing is an act of violation of property law and squatting becomes illegal when the landlord identifies that the property is squatted.

There are a few things that need to be considered while putting these legal terms together. In most states, if a squatter spends thirty or more than thirty days in a property, it automatically makes them legal tenants. This is why if you are a property owner, you should remain vigilant about squatters to move them away before thirty days.

Squatters and trespassers can show fake property documents to law enforcement or the landlord and claim to be the rightful owner of the property. Therefore, it is critical to remove them within the legally defined limit from your property. This limit can be varied across states.

Eviction of a tenant is different from the removal of squatters from a property. Although, they cannot be removed from the squatters/tenant-owned property if there’s a landlord-tenant agreement.

Even those poor individuals who have been scammed by a con man by signing a false agreement are required to be removed by law if the landlord takes action.

Landlords can get the property possession by removing or having the squatters/trespassers arrested for the commission of illegal acts. These illegal activities include housebreaking, posting repossession notice, and filing a court statement for the possession. If a criminal arrest takes place after a civil action, the landlord can regain possession of his squatted property.

Squatters occupying the unattended property often found asking for tenants’ rights by claiming that they have been paying rents, signed a (typically fraudulent) agreement, and having made an oral agreement with the landlord. They also claim that they have a verbal agreement to perform improvements on the property in return for rental payment.

In lieu of these claims, the legal actions for their eviction get complicated and delay the process as well. In some situations, landlords have to put ‘cash for keys’ agreements to evacuate squatters from the property.

Essential steps to protect your property from squatters

Squatting often happens in vacant rental units. To protect them from squatters, follow these simple steps.

Due to the widespread job losses after the surge of the Covid-19 pandemic Federal and State Governments passed the legislation of eviction moratoriums in 2020.

According to this law, the landowners were restricted from removing tenants who did not pay rent. It also prohibits the landlords from asking for additional or late fees when they collect rents later.

This legislation ignited the interest of using tenants’ rights by squatters to retain the property possession without the owner’s consent. According to the dean of Cornell’s law School, Eduardo Peñalver, “You’re engaging in trespass and that’s bad, but if you do it long enough you become the owner.”

State property eviction restrictions vary from one state to another. Landlords and property owners should keep in mind the possible causes, complications, and the legal process for which a tenant or squatter can be evicted. As said, the process can vary, so evacuating local tenants may require some additional information that you should look for.

To work smartly in the process of removing tenants/squatters from your property, you should make a proper strategy. Especially if there are reasons other than non-rental payments.

The moratorium only restricts landlords to pressurize tenants but does not modify the obligations of a tenant specified in the lease agreement. Since the rental payments are delayed due to the legislation but are not forgiven. This is why property owners and landlords should make strategies and work with their tenants to collect the deferred amounts.

This would eventually benefit both tenant and landlord. A tenant will not be removed by force and a landlord would not lose a good tenant.

How to deal with tenants who become squatters

Squatting, however, is directly associated with poor and homeless individuals. The legislation of non-eviction prohibition tempted the individuals living in rental properties to stop making lease payments even if they were not affected by the joblessness and the pandemic itself.

The popular summer resort of Sag Harbor, NY owners The Rosados gave their own home on lease to a successful stockbroker. The broker after passing the legislation quit paying the total of $3,600 rent and also refused to leave.

According to Mrs. Rosado. “We have a squatter that won’t leave. This is directly affecting our family financially, emotionally.”

Many property owners faced the same issues which disturbed their financial and emotional lives, according to a report published in CBS news.

What are squatters rights according to state laws?

Every state enacts laws for protecting property owners from squatters and trespassers. A squatter can acquire ownership of real property in a total of forty-three states. They have to be on the property, maintaining it as their own, and adhering to the following conditions for up to 10 years.

Seven states in all, require squatters to have possession for 7 years or less. While four US states require possession for more than or equal to 20 years. In some states, paying property taxes and having a deed on the property can eventually reduce the time required for legal possession.

According to the Code of Alabama Title 6 Chapter 5 Section 200, squatters can have possession of a property if they have a property deed or they have paid taxes for a maximum of ten years.

In Alaska, squatters can have possession of the property if they are living on the property for seven years or paid the tax for 10 years.

If squatters with the deed on your property are paying property taxes for three or more years, they can have the possession. But it can only be applied if the property is a city lot where the requirement is a minimum of five years. Additionally, if your neighbor has crossed your lines for two years with the deed, he can also claim the property as his own after two years.

As the annotated Arkansas Code 18-11-102 says, a squatter can have the legal possession of a property with deed if he pays the property tax for seven years.

A squatter can gain adverse possession on a property if he pays the tax for 5 consecutive years.

If squatters live in your possession with a deed for a total of 18 years while paying taxes, they can have possession of a property in Colorado.

Squatters living in a property with a deed can claim possession after fifteen years.

Squatters living on your property can claim the right to own it after living in it for twenty years.

Adverse possession would be claimed by a squatter if he has been living in your property for seven years.

Squatters with seven years of living can claim possession of your property. But if the living happens at the property under construction, it would need twenty years to claim the property.

Before claiming possession of the property, a squatter needs to live on the site for 20 years.

Idaho squatters can claim possession of the property if they occupy the space for more than or equal to twenty years.

An occupied property for twenty years can be applied for possession by the squatters. If the taxes are also paid for seven years, a claim for the possession can be considered.

A neglected property should be occupied for ten years before claiming possession.

Possession can be claimed against a property after 10 years of open occupation.

According to Kansas Property Law, for adverse possession, a squatter needs to be living at the property for at least 15 years.

A squatter requires 15 years of occupation to claim possession of the unattended property.

Louisiana squatters have to occupy the property for 10 years without disturbing the peace of the connected houses to claim possession.

A continuous 20 years’ possession is needed when it comes to claiming possession in Maryland.

Uninterrupted occupancy of 20 years will be required for squatters in Maine to claim possession. To claim the title also requires paying taxes.

States with 20/21 years of possession requirements

States with 10 years of possession requirements

States with 15 years of possession requirements

While Texas and New Jersey require squatters to have a continuous 30 years of possession to claim the property rights on the land.

PrevPreviousElder Abuse California: What the Law Says?
NextNaturalized or derived citizens: What’s the difference between them?Next