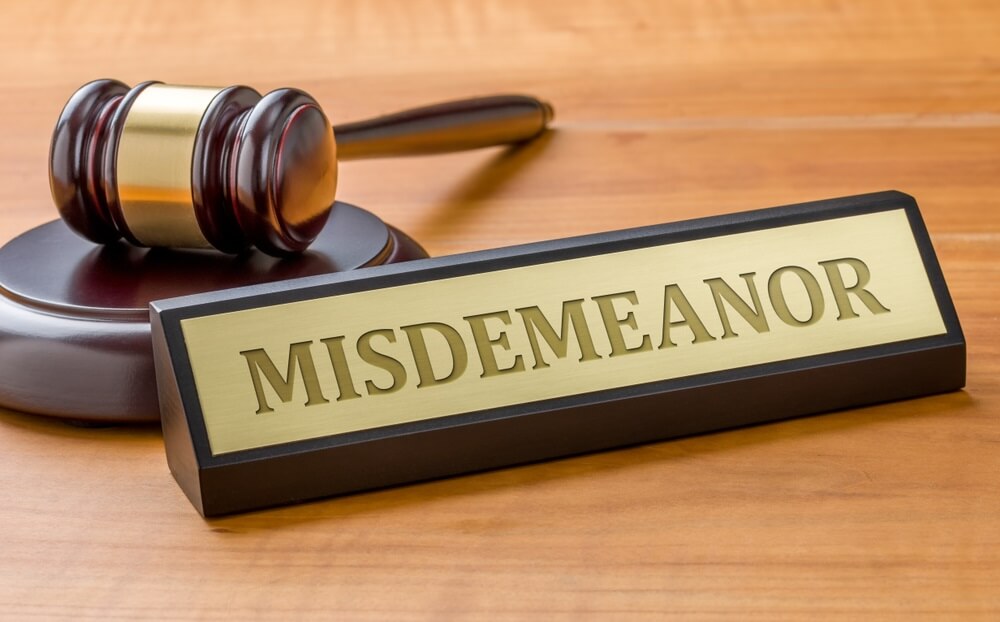 If you are arrested for a crime, then you must be wondering which charge would you get through with? Felony or misdemeanor?

To put felony vs misdemeanor, you must know the basic difference which depends on the severity of the crime and the setting of how the crime had been committed in the first place.

For instance, a misdemeanor could be charged if you are a bit over the limit at a DUI stop. On the other hand, if you are with your children in the car and acutely cross the limit of blood alcohol, then you may be charged with felony charges.

A misdemeanor is comparatively a less serious category of a criminal offense, whereas, felonies are referred to most serious crimes for which as a result you have to serve longer jail time with harsh penalties. Moreover, you may also get a life sentence.  On Contrary, misdemeanors will result in smaller fines, minimum prison sentences, and temporary punishments.

In the United States, every state divides criminal offense into many different categories particularly according to the severity of the crime. But the most common categories of all are infractions, misdemeanors, and felonies.

Typically, infractions are referred to the types of offenses that are least serious, such as violation of law, ordinance, or rule. In many states, no jail time is associated with this category, plus it does not affect your records as well.

In general, you could be pardoned off with a fine as a punishment for an infraction. But in federal law, criminals with infraction charges must serve jail time of a minimum of five days. Trespassing is an example of infractions, but many other violations lie under infarction such as traffic tickets, littering, disrupting the peace, and other minor offenses.

If a police officer witnesses someone breaking the law, one, hands in the ticket to the offender. Infractions, generally, consist of no or little court interactions and much less time in jail. Although, infractions tend to be turned into a much more serious crime if the ticket remained unpaid or the offender did not see the court at the given time.

Misdemeanors are particularly a little serious from the infraction. In most states and under federal law criminal misdemeanor offense lugs a jail sentence that could be less than one year. A misdemeanor is classified into three main categories by states, depending on the type of the offenses.

These classes are divided by the length of imprisonment against a crime under Federal Sentencing guidelines for misdemeanor offenses.

Jail time, as a result of misdemeanor charges, has to be served in the local jail of the country/state rather than a high security federal custodial. Prosecutors generally have the flexibility in determining the type of criminal charge, the type of plea bargain to accept or negotiate, and the length of the jail sentence to be punished.

How serious is a misdemeanor?

A variety of criminal offenses qualify to be called a misdemeanor. Since they are less serious than felonies, they can still compel you to imply some major implications and severe consequences.

As being said, there may not be a significant jail sentence against a misdemeanor conviction, but the consequence of the conviction can exert serious effects on your life. The misdemeanor carries hefty fines and can also bring probation time.

Moreover, if you have been convicted with a misdemeanor more often over a while, it is possible that you could get a more serious and punishable sentence against each conviction which would affect your future career opportunities. In many states, after a misdemeanor, you could lose the right to keep a firearm and lose potential driving privileges.

A felony is defined as the most serious type of criminal offense by the federal government throughout the United States which should be punished for more than a year. The term felony is not used commonly in the US, as states’ definitions are much relaxed against the term. That means, many states do not even classify their criminal offenses as misdemeanor or felony. Some of them follow the term felony but avoid defining it.

According to a general definition, a jail sentence of more than a year that is served in the local or federal high-security prison should be regarded as a felony.

Federal law classifies the sentencing guidelines depending on the prison time one has been convicted with.

While the punishments and the prison time are severe and lasting, criminal procedures must be observed closely so the rights of the defendant remain protected.

Felonies are particularly the most severe crimes that are witnessed widely by society such as burglary, arson, kidnapping, sexual assault, or murder. Felonies, however, can be punished in a lot of different ways instead of just being held for a jail sentence to make sure that the punishment satisfies the brutality and the severity of the crime.

If you’re still confused between the felony vs misdemeanor charges, consulting a lawyer will help you in comprehending how a lawyer can save your rights if you’re convicted for a felony or misdemeanor for the first time.

The competent legal assistance can only ensure you the best understanding of your defense and help you in seeking out the conviction that minimizes your risks and legally protects your rights.

PrevPreviousWhat is the definition of indictment in law?
NextWhat are interrogatories in a personal injury caseNext