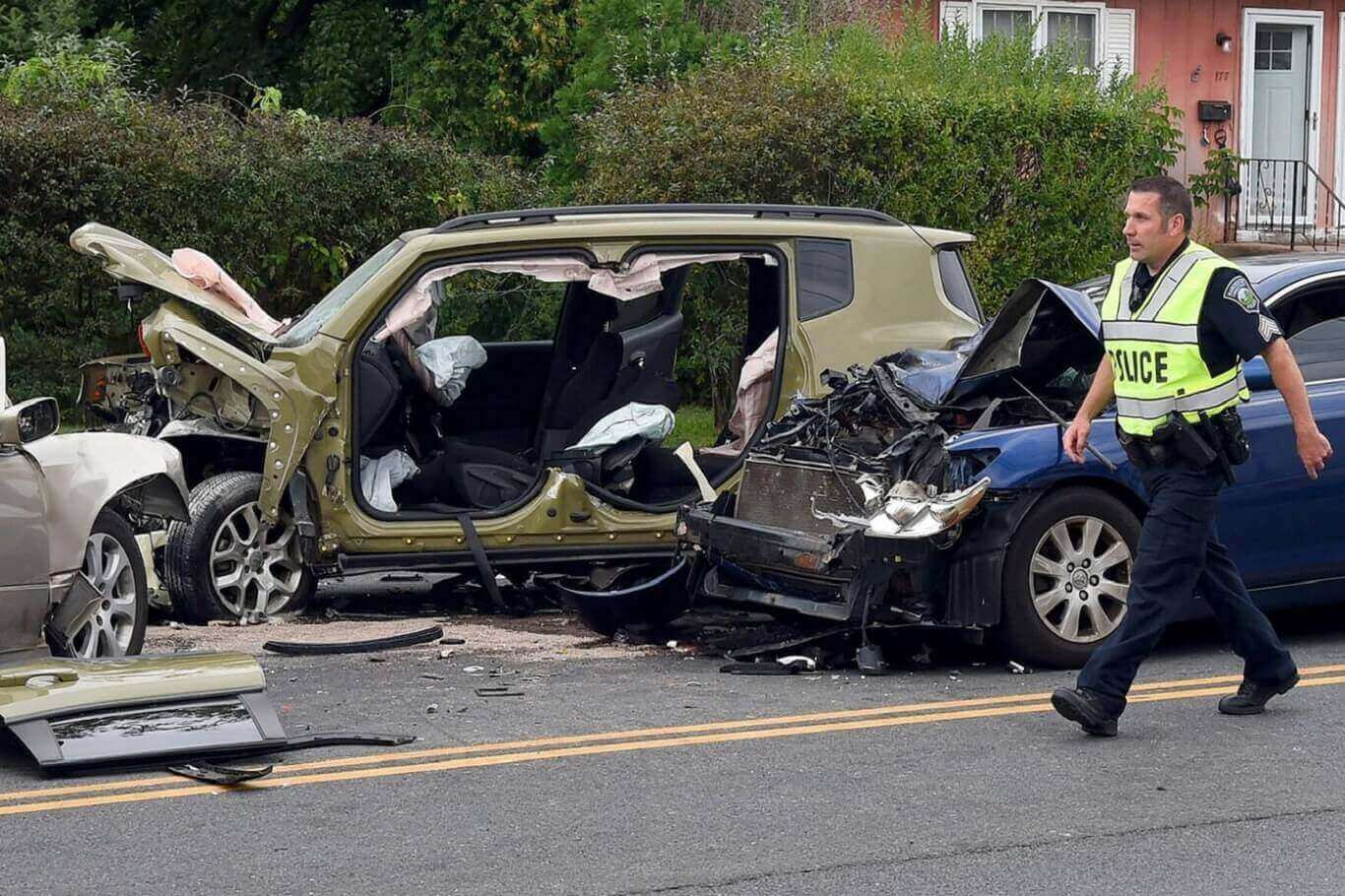 A t-bone car accident is a kind of crash that is derived from a collision that forms a T shape when they collide. A t-boned accident happens when a car’s front bonnet smashes the side of another vehicle.

A variety of situations can be the reason for this kind of collision which includes a disregarding of a red sign where a driver fails to yield to another driver, at an intersection, and the speed of a car in an emergency. The most common reason for a t-boned accident is usually poor judgment when a green light turns on and a driver rushes to make a turn.

Apart from an intersection, a t-boned accident occurs generally on highways when drivers lose control due to the speed and swerve at the side of the roads or commonly at the parking lots when one driver tries to reverse the vehicle to come out of the parking and fails to figure out another approaching vehicle.

T-bone car accidents happen mostly at the intersection. These kinds of accidents occur when the drivers on the road make poor assumptions about the other driver’s intentions, NHTSA. One of the drivers may think that no car is approaching when he reverses the car at the parking lot for instance. Eventually, when the vehicle tries to cross the lane in search of parking, the collision happens. The situation may differ at the intersection but it all comes after once the driver expects something from the other driver which doesn’t happen.

Some other causes that involve in the T-bone Car accidents are:

Accidents that happen at the intersection can be the fault of any driver. Sometimes drivers at the signal think the red signal has turned green when it is not.  When this happens, the driver turning left collides with the driver coming from the opposite direction who’s actually having the green signal.

Other scenarios may have the opposite situation, the driver turning left has the green signal and the driver coming from the other direction thinks he has the right. Whatever be the reason, the consequences can be severe. Of course, just because both the drivers will be at their high speed.

These types of accidents are often called T-bone car accidents where the drivers drive perpendicularly and collide with each other. In these situations, drivers are destined to cross each other from opposite directions. When they collide, they both think that they have a green light, which is actually red. Plus, the consequences of the collision can be severe due to the speed of the drivers. Here, and whenever the accident happens at the traffic signals, the driver who has the red light will be at fault.

A four-way stop can also be the place where a t bone accident occurs. But they are less likely. This is because the drivers stop before they cross each other at the stop sign, as they drive perpendicularly and know who’s coming from the wrong way.

Collision happens from the other side when the driver from the right or left runs when the signal is red. Eventually, the cars begin running at their high speed and rush into each other crossing the road speed limit.  For the same reason, the driver who drove out of the red light will be at fault.

If there’s no intersection, who will be at fault?

Oftentimes, t-bone accidents happen on the road without an intersection. The vehicle at the roadway crossing will be always considered at fault because they have no right to cross the way. These kinds of collisions often happen at the parking lot and on u-turn.

In the parking lot, you don’t see a traffic control device. Before a driver intends to cross the street at the parking lot, he has to make sure that no other car is approaching and the street is clear from both directions.  A t-bone accident happens when a driver does not see or thinks that a car may cross. In other words, the poor decision of a driver is the reason for a t- bone accident.

Taking a u-turn may direct you towards your way quickly but it’s not always safe. If a driver doesn’t recognize the vehicle coming from the other direction, a t-bone accident may happen. The driver making the u-turn would be determined as the driver at fault.

Situations where a driver with the right of way will be at fault?

We cannot always put the driver crossing the red signal or coming from the opposite direction liable. Sometimes, the driver with the right of way will be at fault.

This is because when the driver crosses or drives on the road with the right of way he also needs to be vigilant of the road ahead. It’s his duty to remain present-minded and foresee the traffic that may come across.

Following are some ways where the person with the right of way will be at fault:

Possible consequences and common injuries at a t-bone accident

Unfortunately, drivers are much more likely to get hurt badly after a t- bone accident. Not only the cars from both ends but the passengers in the cars get severe injuries as a result.

Some of the most common injuries that happen after a collision include:

When t bone accidents with head injuries occur, many times they can be severe.  Potential outcomes which include concussion, broken glass, along with brain trauma can take over and alter your life as well.

Additionally, if you get the broken glass pieces in your eyes, they can make you blind for life. Plus, when you get head injuries, your memory could be affected, your concentration may be dramatically distracted, and your reasoning and decision-making abilities may also hinder your day-to-day task.

Neck injuries on the other hand may occur when your neck is pushed forward or backward due to the force of a collision. These neck injuries are called whiplash and can cause a herniated disc.

Back injuries involve anything from a herniated disc to the damages of the spinal cord causing continuous pain. Back pain is acute and can be chronic as it spreads through the whole body. The worst part of the back injuries are the ones that make you paralyze or as a result of which you could lose an organ.

In the same context, abdominal, pelvic, and chest injuries may also come without invitations in a t bone accident. These kinds of injuries are often caused by motorcycle or bicycle accidents. A driver may possibly have injuries including pelvic, chest, and abdominal injuries with severe pain. As a result of these injuries, it is a must that you seek medical help at once.

In case you are injured in a t- bone accident and you are not the at-fault driver, then you can claim financial compensations for your loss and damages. Before you hire a car accident attorney, read the following.

How to protect your rights after a t-bone accident?

Let’s admit it, you can be super confused when it comes to proving an at-fault driver at a t bone accident. Firstly, be sure while making statements with your insurance company, when you intend to claim financial compensation. Make accurate affirmations and take time to figure out who has the responsibility for the incident.

Depending on the state where you live, you have to provide strong proof to prove the at-fault driver. Traffic rules may not but compensation rules may differ from state to state. Some states follow the ‘pure comparative compensation rule’ according to which if you bear 30% fault of the t bone accident, then you can claim 70% compensation.

The accident that relates t bone incidents is too complicated to configure either in front of the insurance company or the experts. It is suggested to talk to a personal injury lawyer and explore the legal options that you can attain.

It is suggested to consult an attorney as early as possible. This is because when you hire a professional attorney, they will visit the street/place where the accident took place and will investigate the traffic flow and device around it.

Additionally, they will also:

Additionally, your personal injury attorney will also speak to your insurance company and to the attorney of the other driver to take his statement. Putting everything on your lawyer’s shoulder, you can take time to recover from the injuries you bore.

How can a personal injury lawyer help you?

Not hiring an attorney for a t bone accident whether you’re the at-fault driver or not, would be insane. This is because you have to hire someone to represent you in front of the jury if the other driver tries to put the burden of proof on you.

Several reasons are there which benefit you when you hire one, this include:

If you are broke and that is one thing that hinders you from hiring a lawyer for your compensation, then you should listen to this. You have to pay your attorney once after you win the case. This means if the court verdicts against you, then you don’t have to pay a penny to your lawyer.

Therefore, do some online research and know-how to hire a personal injury attorney for a t-bone accident.