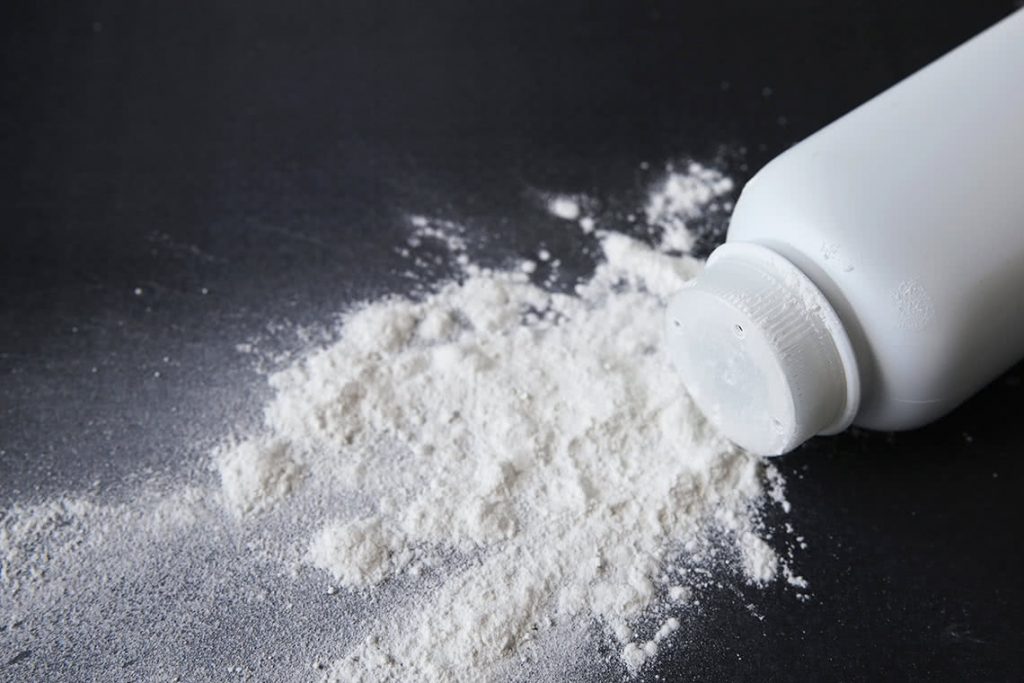 Many who have recently heard about the risks of talcum powder-related ovarian cancer and baby powder-related ovarian cancer have wondered how great the risk is, and if talc can cause cancer. There has been an inherent risk factor in talc, although, since the 1970s, talc used in homes has been asbestos-free. Talc is the softest mineral on earth, made up largely of the elements magnesium, silicon, and oxygen. Talc has been associated with respiratory diseases.

When the powder is sprinkled, it becomes a base ingredient in cosmetic products, like some baby powder. Although talcum powder has been used to prevent sagging latex gloves, for the most part, the powdered inner surface has been replaced with cornstarch powder. Talcum powder is used for electronics and serves as an insulator due to its high resistance to heat and electricity. Likewise, talc is used as a filter in various paints, rubber, and insecticides, and it can be used as an ornamental stone, figure engraving, tiles, sculpture, and jewelry boxes.

Receive the Compensation You Deserve!

What are the problems associated with talcum powder?

Talc, which contains asbestos, can cause cancer when inhaled, although the evidence regarding asbestos-free talc is less clear. Many studies on women have been observed for the possible connection between talcum powder and ovarian cancer, and some researchers believe that talcum powder particles, when used in the genital region, can travel through the vagina, uterus, and tubes of the body.

There have been many conflicting results regarding whether the use of talcum powder in the genital regions may result in an increased risk of ovarian cancer from talcum powder.

How does talcum powder cause ovarian cancer?

While Johnson & Johnson manufactures various powder products instead of talcum powder, they continue to manufacture a J&J Baby Powder, which contains talc. Consider the following warnings regarding talcum powder cancer and ovarian cancer caused by baby powder which lead to the johnson and johnson talcum powder lawsuit:

The first warning of potential hazards associated with the use of talc in the genital region originated in 1971.

In 1992, a study was published which found that regular use of talcum powder in the genital region increased the risk of developing ovarian cancer three times.

A 1997 study published by the American Journal of Epidemiology correlated the use of talcum powder in the genital region to an increased risk of ovarian cancer.

Anticancer Research collected and reviewed metadata from nearly 12,000 women, concluding that the use of baby powder (with talc) is associated with a 33 percent increase in ovarian cancer.

In 2008, a Harvard researcher, Dr. Margaret Gates, concluded that daily use of J&J Shower to Shower (and other familiar producers) increases the risk of ovarian cancer by 41 percent.

In 2010, Dr. Gates and two Harvard researchers published a study that reaffirmed the belief that the use of talc in baby powder could be carcinogenic to humans.

How to file a talcum powder lawsuit?